Four intense days of rubbing elbows with fellow fans and some celebrities has come to an end as Comicpalooza 2015 closed it’s doors shortly before a deluge of rain flooded out large portions of Houston and the surrounding area. What did I take away from the experience? Were there incredible sales numbers for Mishaps and Mayhem and The Adventures of Reztap? Did I meet any celebrities? Where there interesting sights and sounds?

I had a lot of fun hanging out with the Triscelle Publishing crew, Heather Poinsett Dunbar and her husband Christopher Dunbar (co-authors of the Morrigan’s Brood series), Maeve Alpin (author of As Timeless As Stone among other steampunk novels and also a writer of other books under another pseudonym), and Donna – a close friend of the Dunbars who helps out at many a con. Numerous other friends and colleagues stopped by to chat and browse. In short, had my presence at the con been solely for enjoying myself and hanging out with great people, I fulfilled that in spades!

Sales of Mishaps and Mayhem and The Adventures of Reztap were fair. Nothing outstanding, but definitely better than my previous two public appearances combined. I previously sold a total of 9 books between HAB 2015 and AggieCon, but at Comicpalooza I sold a total of 17 books! Meeting and discussing my books (in other words, hawking them) was a fun experience, especially when the listeners were intrigued enough to buy them. Did I make any money? Actually, no, but I came close to breaking even. The upside to the experience though was signing people up for a free PDF ebook of Mishaps and Mayhem – I got 35 people to sign up! That in itself was probably worth it. If they like the ebook, they’re more likely to become loyal readers and that potential means future sales of both The Adventures of Reztap and the sequel coming out next month, Reztap and the Quest for the Insane Moth!

I did also have the opportunity to donate some books and a little cash to The Stan Lee Foundation! I really felt a connection to their stated desire to provide equal access to literacy and education. I think education is the great equalizer in society and I’d like everyone to have a fair opportunity t rise to the occasion and be successful – it seems to me this is a great fledgling organization and worthy of both my support and yours! So pop in and give them a visit.

Also got to take a pic for charity with the Mach V (replica) from the Speed Racer cartoon series: 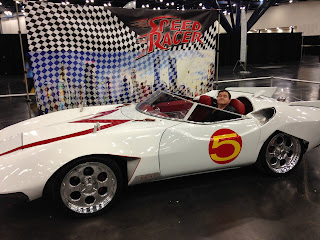 If you’ve read Mishaps and Mayhem, you may recognize a reference to this vehicle in one of the stories. If you do, I’d love to hear from you. I sprinkle a lot of references to different shows and concepts in the Chronicles of Reztap – it will be interesting to hear how many people catch some of them if not all.

I got a signed pic from Barry Bostwick (Rocky Horror Picture Show, Spin City, et al) and left him a Reztap bookmark. Who knows if he’ll read it or not, but I really enjoyed chatting with him for a few moments and his personalized message to me on the photo. He’s a really nice guy with a wonderful sense of humor.

There were dozens of celebrities there from all walks of entertainment – actors and actresses, comic book and regular writers and artists, cosplayers, and some technical crew people of some fame including makeup artists and model builders. There was a lot to see and do. I only visited a fraction of what I wanted, but I was technically there to work, not to just enjoy the con. This year it was so much bigger than when I got to it just two years ago! There were thousands in attendance each day – I think they topped ten thousand on Saturday! 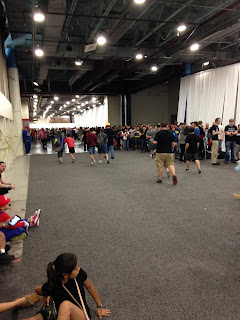 It was by far the largest convention I’d ever attended.

I was really astounded by the complexity of some of the cosplayers’ costumes. While I didn’t recognize every character, I did appreciate the time and effort they put into their presentation. Seeing some of the little kids dressed in costume too just brought a smile to my face – this was truly a family friendly event and I was glad to see so many families there enjoying the con.

I hope you were able to make it out to Comicpalooza even if you weren’t able to see me. I will be at ApolloCon in June 2015, where I should have book 2, Reztap and the Quest for the Insane Moth – hope to see you there, especially if you couldn’t see me at Comicpalooza!